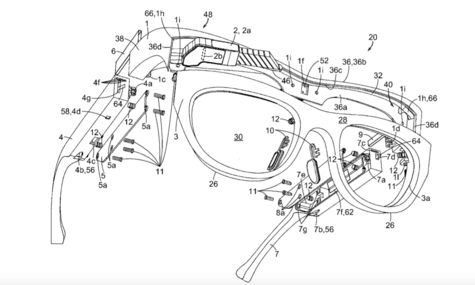 For reference, 2017 FY Revenue was $27.8M with a Net Loss of $26.3M for Kopin, so we are talking about incredible growth within a short period of time. How is that possible? Device shipments, lots of them, coming on-stream in 2018 through 2020.

The segment Revenue forecasts above are based on annual unit shipment estimates I have created based on my knowledge of the industry:

I consider these shipment estimates to be reasonable and certainly achievable given Kopin’s existing capacity to produce AMLCD display modules and the fact that their Whisper and OLED business models are fabless and outsourced.

Kopin closed at $3.12/share on March 29th. If 2020 Revenue and Earnings are in-line with my estimates, I see EPS and Sales Per Share multiples justifying a $25 - $30 share price range. Between now and 2020, I see the stock trading up with each event or announcement that validates these estimates.

In short, Kopin’s near term prospects to deliver explosive growth based on broad adoption of head-worn AR wearables, a move to speech-driven user interfaces, and a pending VR revolution should drive all investors to take a look at this company as a core holding in their portfolios.

The AR Gold Rush is real, happening now, and Kopin is uniquely positioned to supply everyone the provisions, picks, and shovels they need.

Risks
Risks include delays in adoption of enterprise or consumer AR or lower adoption rates that result in shipment levels below what I expect. There is risk that Kopin does not achieve design wins in Glass 3, AirPods, or does not sign additional Golden-i licensees as I expect. However, I believe we need to look to John Fan’s success with the HBT transistor in 1995 and temper concerns that my proposed growth expectations are unrealistic. John has created technology and secured design wins inside billions of devices before, and I expect him to deliver an encore performance with AR, VR, and speech enhancement technology for wearables starting in 2018.

​
Disclosure: I am/we are long KOPN.

​Some sage advice I was once given when assessing emerging growth stories like Kopin’s, “The longer the base, the higher in space.”

Take another look at the chart. Within a few years of the market realizing that Kopin was providing a key component for Qualcomm’s CDMA architecture, the stock went parabolic running up to a $3B market cap. When the market again realizes that John’s little company owns key IP and components that every wearables AR vendor needs, what do you think the share price will do?

The Second Reason:
​There is also a large Short position in Kopin as of March 28th: 8.5M shares with 12 days to cover. Expect a massive news-driven short squeeze further fueling a share price rise.

Last, but certainly not least, The Third Reason:
​This is the fundamental growth story supporting why Kopin should be considered a key holding in your portfolio to capitalize on the Augmented Reality Gold Rush already underway. Below, I have summarized how I see Revenue and Earnings playing out for Kopin 2018 through 2020.

This is Kopin's unique Pupil display technology in a form factor consumers could use every day as a smartphone accessory. The image was clear and bright. The display and Pupil optics so small (4mm in height) they are embedded in the top the frame (see patent image) - onlookers cannot see you are looking at a virtual image in the upper portion of your field of view. It is discreet and hands-free due to Whisper speech enhancement. The is the kind of unique wearable technology that will take us beyond Google Glass and even proposed waveguide concepts for viable consumer devices within two years. Apple, Google, Amazon, Facebook, Snap, Samsung, and many others will want access to this technology.

Technology and consulting companies are all clamouring to get in on the AR Gold Rush. Ecosystems are being readied for AR, bets are being placed with VC funding rounds, leaders are talking about how AR will change every area of our world.

This is the time for a supplier to emerge and provide picks and shovels to every AR Gold Miner heading up the mountain. That supplier is Kopin.

Kopin is an MIT spin-out that has leveraged decades of military and private sector driven R&D work to create a portfolio of over 300 patents I believe are required to succeed in a wearables Augmented Reality world. Kopin’s patents and components are the picks and shovels every AR Gold Miner will need.

I am here to tell you that Kopin is readying an All-Out AR Assault For 2018. You will see evidence of this prediction in the next 60-90 days. I am going to unpack these catalysts for you and provide an opinion on what they mean for Kopin and investors like you.

Kopin To Launch All-Out AR Assault In 2018
2018 is the tipping point for AR and any of the following near term events could be a catalyst for a big run-up in Kopin’s share price:

AWE 2018:Four Growth Drivers For Kopin On Display
I now believe that AWE USA 2018 will be a true launch event for Kopin. We will see four growth drivers for the company on display AWE:

SOLOS:Pupil & Whisper Bring AR To The Masses
With SOLOS, Kopin will showcase a consumer (prosumer) device that integrates two key technologies: Pupil and Whisper. It is part of the proof the industry needs to overcome the failure of Google Glass as a consumer device.

SOLOS is days to weeks from launching. I have a Gen 1 Kickstarter version of this device and used the full market-ready Gen 2 version of SOLOS on my visit to Kopin in March. I can tell you this:

In short, SOLOS is the first truly viable consumer AR smart glass device. This is a product you can take out of the box and start using immediately. It works as advertised and the target market, athletes, will not be disappointed. They will use the device and it will become as important to them as their smart watch.

RealWear is the first Golden-i licensee that has begun to penetrate enterprise AR in a meaningful way. I expect others to be revealed at AWE 2018, perhaps Panasonic or Samsung. I expect even more examples of Golden-i licensees to be announced 2H 2018.

Use RealWear and compare to any other device - you will see that Golden-i is the only platform ready for end users today. I believe Kopin will dominate this segment through license agreements, including with some big names like Panasonic, Samsung, Honeywell, and many others - for years to come.

Specific Design Wins I Expect From Kopin In 2018

Google Glass 3 - Prosumer
Kopin and Google work closely together. Google chose Kopin over Himax for Glass Enterprise Edition and is provided a custom display by Kopin. I expect Glass 3 to be announced this year and further expect that Kopin will win the display socket and supply Whisper noise cancellation and even display optics. Kopin has a version of Pupil that is nHD resolution matching Glass but with a much more discreet profile and lower power consumption - hallmarks of Pupil. Also, Pupil results in no eyestrain versus current Google optics. Glass 3 will validate AR as a viable consumer market and may result in a volume ramp for AMLCD displays, Pupil optics, and Whisper chips for Kopin.

AirPod Generation 2
Apple needs to improve hands-free Siri performance for the next version of AirPods. They also need to shorten the length of the AirPods “stalk” which dangles down too low below the ear. Current AirPods noise cancellation microphone placement is 28mm apart. I believe Kopin’s Whisper noise cancellation technology can reduce the distance between the microphones to 10mm AND improve Siri’s performance. For these reasons, I am predicting a potential design win inside Apple AirPods for Kopin’s Whisper technology to ship in 2019.

Beyond Apple, Kopin is making a big push to integrate their $5 Whisper Chip inside devices that confirm to the TWS (True Wireless Stereo) standard to enable voice user interfaces via wireless in-ear headphones. AirPod Generation 2 could be just the start of a billion unit business for Kopin inside TWS devices.

Golden-i Platform Licensees
As evidenced by Michael McMahon of Kopin speaking about developing for the Golden-i platform at AWE 2018, I believe we will see licensees and partners beyond RealWear announce Golden-i devices in 2018. Mr. McMahon is a former Panasonic VP responsible for rugged laptops and tablets - exactly the devices Golden-i was built to replace with a hands-free mobile head mounted computer to make workers more productive safely. Re-read that. Golden-i is a platform and it could be Wintel of enterprise Wearables for the next 10 years.

Three Reasons Why You Need To Look At Owning Kopin
​
The First reason:
​Take a look at Kopin’s 20 year chart: 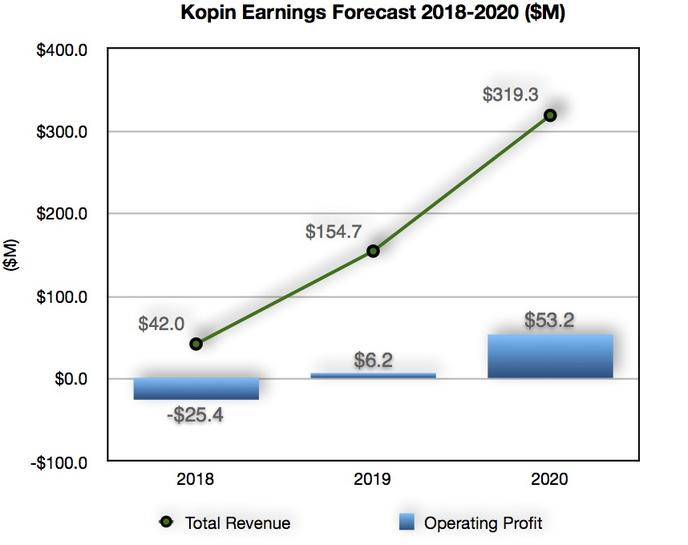 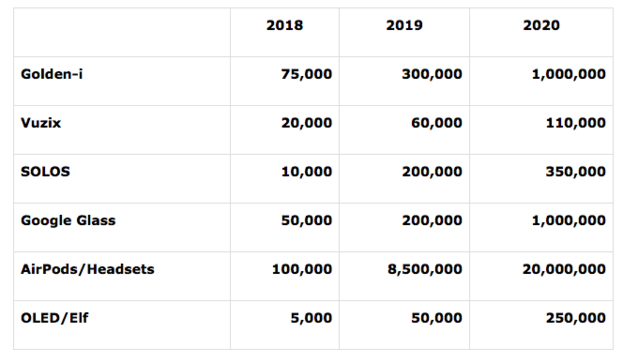 “The wait is over. Let’s move ahead to the harvest.” - John Fan, CEO of Kopin

​Apple (AAPL) and Google (GOOGL) are moving us from smartphones to personal wearable ecosystems:

“ AR is going to change everything.”- Tim Cook, CEO of Apple

Enterprise Augmented Reality is catching fire now. Large companies across the globe see the value of workers having hands-free, head-worn AR devices to complete their work more safely and productively than ever before. As an example, Cisco (CSCO) and Accenture recently participated in a funding round for Enterprise AR software leader Upskill.

I recently visited Kopin (KOPN) to interview John and the management team and was reminded of the incredible HBT story and how the company contributed to the CDMA smartphone revolution. At the time, Kopin created a disruptive technology that was subsequently designed into billions of devices.

As with HBT in 1995, Kopin knows it can provide at least three pieces of the wearable ecosystem puzzle to make Apple, Google, and other Tier One’s product visions a reality:

On my recent visit to Kopin, John Fan showed me a new Second Screen AR consumer smart glass prototype incorporating Pupil optics and Whisper noise cancellation. Below is an image of me trying it on as well as an image from the associated US patent application (#20170108714) filed in April  2017: 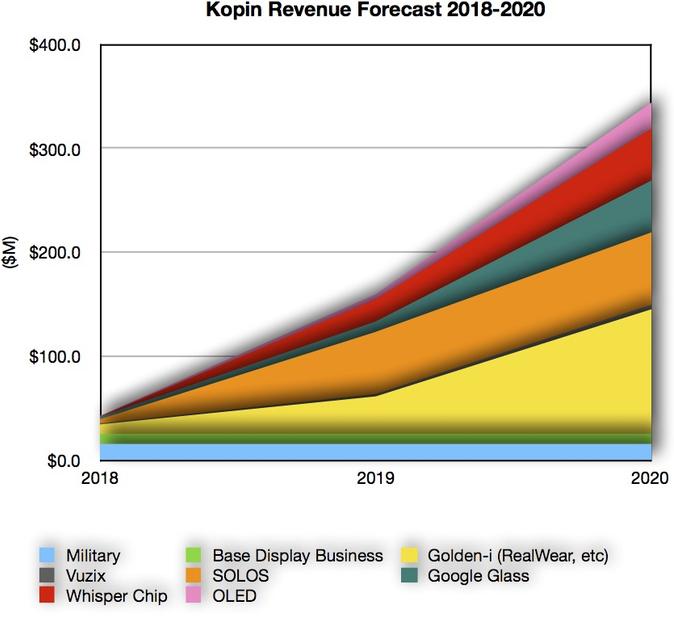 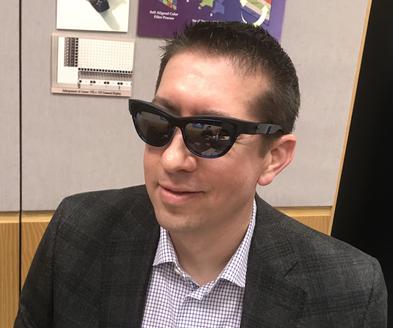