Please note: All diagrams on this page have been reproduced from publicly available USPTO filings and links have been provided to the original files. Please review original files for complete information. Patent filings noted above are property of Kopin Corporation, all rights reserved. 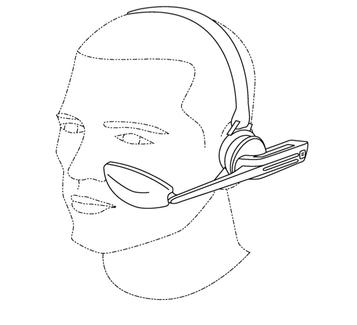 http://pdfpiw.uspto.gov/.piw?Docid=08825468&idkey=NONE
Filed: July 31, 2008
Granted: September 2, 2014
Description:
“An apparatus includes a monocular display with a wireless communications interface, user input device, transmitter, and controller, and may provide a video link to and control and management of a host device and other devices, such as a cell phone, computer, laptop, or media player. The apparatus may receive speech and digitize it. The apparatus may compare the digitized speech in a first language to a table of digitized speech in a second language to provide translation or, alternatively, may compare the digitized speech to a table of control commands. The control commands allow user interaction with the apparatus or other remote devices in a visual and audio manner. The control signals control a "recognized persona" or avatar stored in a memory to provide simulated human attributes to the apparatus, network or third party communication device. The avatar may be changed or upgraded according to user choice.” 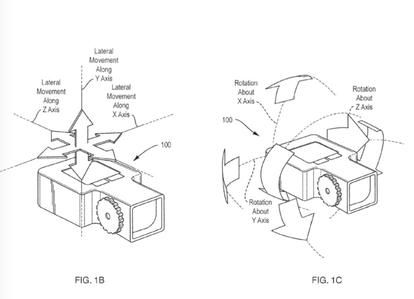 This document highlights seven (7) Granted patents that detail key intellectual property (IP) owned by Kopin as it relates to head worn, Hands-Free Monocular Augmented Reality devices. All of these patents are available on the USPTO website and I have included links and excerpts from the related filings as appropriate.

The first document I recommend investors review is a white paper entitled, “Deploying Augmented Reality and Hands-Free Mobile Computing” written by Jeff Jacobsen an AR industry veteran. It can be found at the following link: http://www.golden-i.com/deploying-augmented-reality-and-hands-free-mobile-computing-white-paper/

The aforementioned white paper will provide you the background required to conclude as I have that Hands-Free Monocular Video See-Through AR is the only form factor available today that enables improved worker safety and productivity at a reasonable cost and considering human factors.

Next, I would direct your attention to some key patent filings that validate my belief Kopin has built a deep and wide competitive moat around the Hands-Free Monocular Video See-Through form factor. In fact, I believe their protected IP in this area is so strong, it is possible that any vendor choosing to participate in the AR market with a Hands-Free Monocular AR device will only be able to participate in one of three ways:

Kopin essentially created the Hands-Free Monocular AR form factor over the course of the past decade through almost $50M of R&D efforts. In addition, the IP they created has been protected with a series of Patents including those you see here. 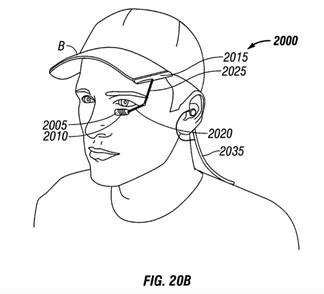 “Remote control of host application using motion and voice commands”
US Patent 9,235,262
http://pdfpiw.uspto.gov/.piw?Docid=09235262&idkey=NONE
Filed: May 5, 2010
Granted: January 12, 2016
Description:
“A remote control microdisplay device that uses hand and head movement and voice commands to control the parameters of a field of view for the microdisplay within a larger virtual display area associated with a host application.” 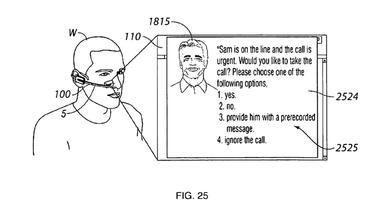 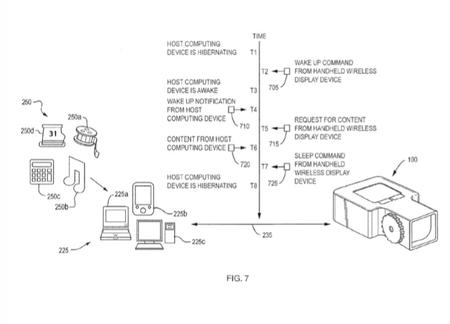 “Mobile wireless display for accessing data from a host and method for controlling”
US Patent 9,116,340
http://pdfpiw.uspto.gov/.piw?Docid=09116340&idkey=NONE
Filed: May 14, 2008
Granted: August 25, 2015
Description:
“An apparatus includes a monocular display with a wireless communications interface, a user input device, a transmitter, and a controller. The monocular display is positioned relative to the user's eye to display images to the user while occluding less than half of the user's maximum viewing space. The apparatus can incorporate a wireless communication controller that not only provides a video link to a host device, but also provides for control and management of a host device and other more devices. In this context, a host device may be any appropriate device that sources audio, video, text, office functionality and other information, such as a cell phone, personal computer, laptop, media player, and/or the like. The apparatus and the host may support Microsoft Windows SideShow, Remote Desktop Protocol (RDP), and Virtual Network Computing (VNC).”

“Head worn wireless computer having high-resolution display suitable for use as a mobile internet device”
US Patent 9,886,231
http://pdfpiw.uspto.gov/.piw?Docid=09886231&idkey=NONE
Filed: March 27, 2009
Granted: February 6, 2018
Description:
“A handheld wireless display device, having at least SVGA-type resolution, includes a wireless interface, such as Bluetooth.TM., WiFi.TM., Wimax.TM., cellular or satellite, to allow the device to utilize a number of different hosts, such as a cell phone, personal computer, media player. The display may be monocular or binocular. Input mechanisms, such as switches, scroll wheels, touch pads, allow selection and navigation of menus, playing media files, setting volume and screen brightness contrast, activating host remote controls or performing other commands. The device may include MIM diodes, Hall effect sensors, or other position transducers and/or accelerometers to detect lateral movements along and rotational gestures around the X, Y and Z axes as gesture inputs and movement queues. These commands may change pages, scroll up, down or across an enlarged screen image, such as for web browsing. An embedded software driver permits replicating a high-resolution screen display from a host PC.” 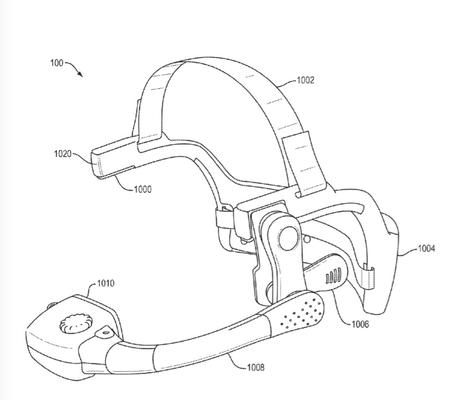 “Portable communication display device”
US Patent 8,040,292
http://pdfpiw.uspto.gov/.piw?Docid=08040292&idkey=NONE
Filed: October 26, 2007 (Incorporates Kopin patent filings from 1993 through 1997)
Granted: October 18, 2011
Description:
“A head-mounted display system displays information via a matrix display element mounted within a housing that is positioned relative to at least eye of a user. The display is connected to a video or information source such that the user can view information or images shown on the display. The display can be mounted to a frame so that the user can move the display in and out of the user's field of view without adjusting the supporting harness that holds the display on the user's head.” 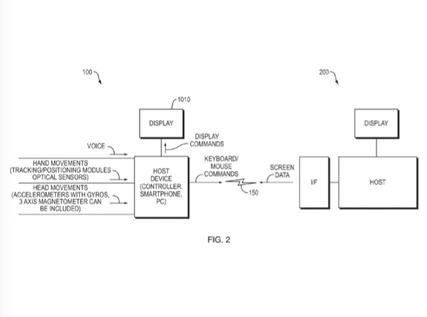 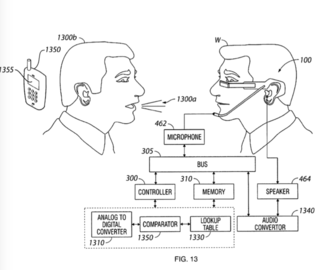 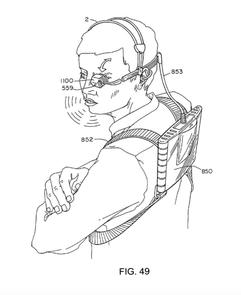 “Monocular Display Device”
US Patent 9,217,868
http://pdfpiw.uspto.gov/.piw?Docid=09217868&idkey=NONE
Filed: January 8, 2008
Granted: December 22, 2015
Description:
"An apparatus includes a monocular display with a wireless communications interface, a user input device, a transmitter, receiver and a controller. The controller is configured to control the transmitter for sending and receiving control signals to and from an external device via the wireless interface. The monocular display is positioned relative to the user's dominant eye to display images to the user while occluding less than half of the user's maximum viewing space, while enabling the user to send and receive audible information or music.” 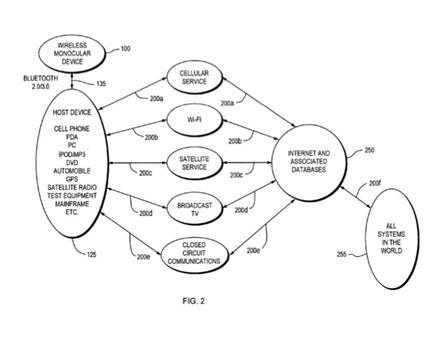 “Headset computer (HSC) as auxiliary display with ASR and HT input”
US Patent 8,929,954
http://pdfpiw.uspto.gov/.piw?Docid=08929954&idkey=NONE
Filed: May 13, 2013
Granted: January 6, 2015
Description:
“The present invention related to human/computer interfaces and more particularly to a headset computing display device that accepts voice commands and tracks head motions to provide command inputs to and receive display information from a software application executed on a host computing device. An example embodiment of the present invention includes a method of, and corresponding system for, operating a native Smartphone or PC application, simultaneously displaying an output of the application through the Smartphone or PC screen and a headset computing display device, and using speech and head tracking commands to control the native application. The present invention enables hands-free operation of a Smartphone or PC application.” 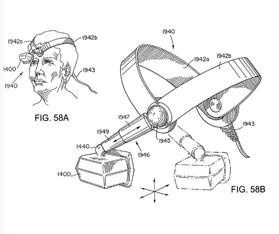 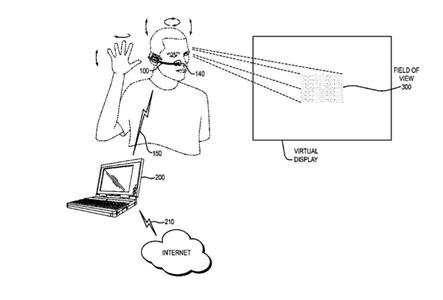 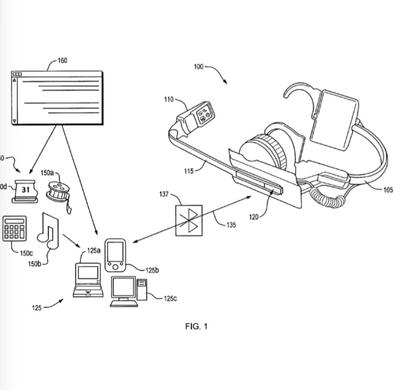 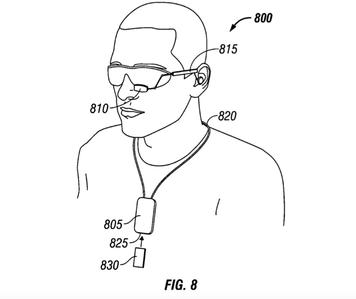 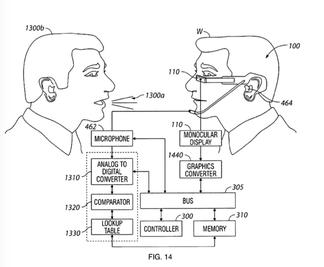 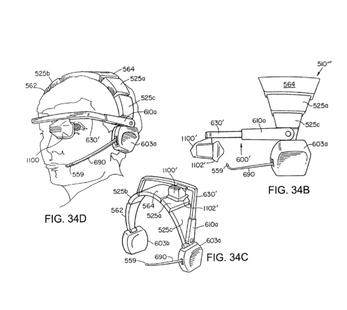