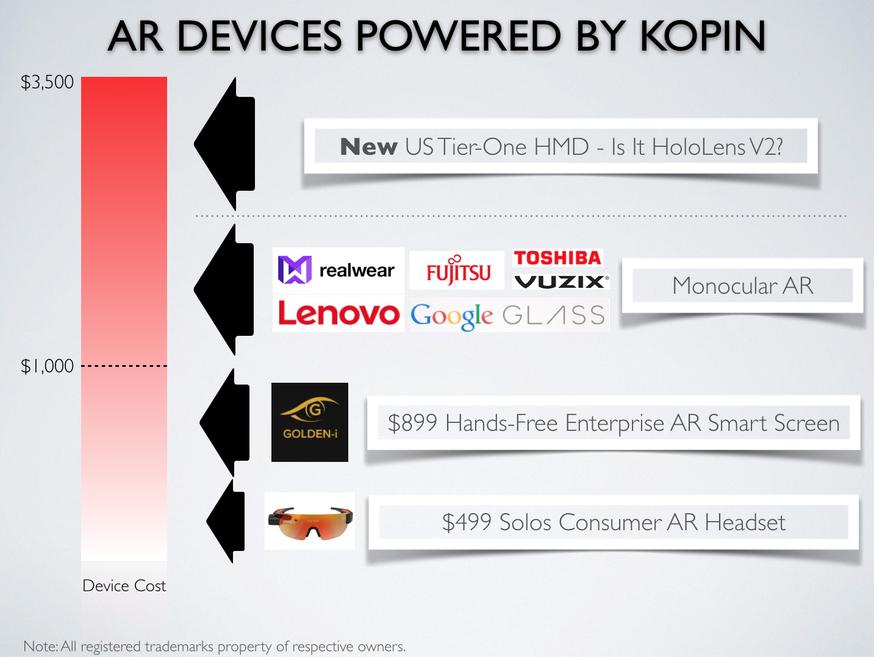 The week beginning August 6, 2018, contains two scheduled events that I expect will reveal to wearables AR investors that the tide is finally turning. I think we will see tangible proof that Enterprise AR is taking hold across the globe and pilots have converted to rollouts within large organizations. The two key AR events I will be watching are:

To me, the more important event is Kopin’s Q2 release. Given the fact that Kopin has AR components and IP inside devices from Google (GOOGL), Honeywell (HON), 3M Scott Safety (MMM), RealWear, Lenovo, and even Vuzix, their year-over-year revenue performance will be very important in gauging Enterprise adoption.

Before we get into what I expect Kopin’s Q2 to look like, here is a summary of key industry events of note impacting my outlook:

My Q2 2018 Revenue Forecast
I now expect Kopin to post revenues of $7.1M, a 20% increase over Q2 2017. The key here is where the growth comes from. I expect the Military segment will increase roughly 10% YOY as management has indicated. However, I expect the bigger growth story will be in the Industrial headset category.

Based on activity we are seeing from Google, RealWear, Vuzix and others, along with visible acceleration of adoption and conversion from pilot to rollout for Enterprise AR, I think Kopin may be in the process of doubling their AR component output YOY. As a result, we may see an incremental $0.9M in Enterprise AR component sales in Q2 2018 vs. Q2 2017. This large increase will be driven by a wide variety of customers. Some, such as Google, RealWear, 3M Scott Safety, and Vuzix, are reordering displays; others, such as Lenovo and the as-yet-unidentified US Tier One, are readying new devices for launch.

In addition to an exciting growth story in the Enterprise AR space, watch for management to refine 2018 and 2019 guidance - likely upwards as a line-of-sight to 1M Enterprise AR headset shipments becomes clearer to Kopin based on firm orders from their customers. As the graphic below indicates, they are the display component market share leader by a country mile:

We may also get some updates on Solos, Kopin's consumer AR smart glass solution, as well as traction they are seeing with the Whisper noise cancellation chip inside True Wireless Stereo headsets such as Apple's (AAPL) new AirPods coming in 2019

I maintain my personal estimate of current intrinsic value for Kopin of $4.50/share based on Cash + IP today. With a breakout Q2 performance and revised FY 2018 guidance and the potential for a breakeven quarter earlier in 2019 than previously expected, we could see Kopin trade between $8 to $10/share 2H 2018.

Disclosure: I am/we are long KOPN.