As all tech journalists and tech enthusiasts know, back in 2015 Google and Google Glass were damaged goods in the public eye, to the end users, and with the media. To that end, Google went back to the lab to prevent two things from being permanently shattered: their image and their baby, Google Glass.

In July of 2017, Google brought Google Glass Enterprise Edition (EE) to market with very little media attention. Other than a blog post from Jay Kothari, the head of Google Glass, the company has steered clear of any major public announcements regarding Glass EE. Google wasn't looking to grab headlines. It knew it had a value proposition in the enterprise market and it knew it had a strong customer base (KO BA GE AGCO Audi DHL…) piloting the device along with a few key system integrators (Upskill, Ubimax, Proceedix) navigating industries with the right software applications on the devices. The time was right to bring Glass back but it was also avoiding a resurgence of negative media headlines and giving itself and partners time to produce a shatter proof game plan for future Glass generations.

Here’s one way investors could prosper from Google’s persistence and perseverance into making Glass go from the Enterprise to the prosumer to the consumer without breaking glass:

Kopin Corporation (KOPN - $2.34 NASDAQ), a collaborative with MIT Labs, has spent the last 3 years in stealth R&D mode alongside Google X making GLASS EE formidable and, at the same time, making future generations of Glass assthetically pleasing to the prosumer and eventually the consumer. The market for such a device could be huge - over the next 3 years unit sales could ramp from 20k in 2018 (~60-70k since 2015) to 200-250k units in 2019 to millions in 2020 and beyond.

Kopin’s relationship with Google has been in SEC filings over the years but Google hasn't ordered materially in over 3 years since it purchased ~$7 million in displays and optics for a 2015 consumer Google Glass launch that never occurred.

At CES 2018 in January, the relationship between Kopin and Google was even bigger and more visible than anyone took notice of. Kopin’s CEO John Fan held a keynote event for his company and its wearable customers (RealWear, Lenovo, Vuzix, and Laforge) in a penthouse suite at the Palazzo. At the introduction, Dr. Fan was calling out for Google’s head of Glass, Jay Kothari, to have him speak. Jay clearly wasn't present on-time from Dr. Fan’s comments at the microphone. A few minutes later, Dr. Fan was seen calling out for Jay thinking he had arrived. Jay no-showed! Now, there is no way, no how, Jay just didn't show up to this meeting. We know from Kopin’s CES product showing at least one pair of enterprise smart glasses was missing from being shown at CES. The CEO told investors on two prior EPS conference calls (August 17, 2017 and November 17, 2017) that 5 pairs of glasses (Solos, Pico Eagle, Lenovo, ELF and an Enterprise device) would be shown at CES. Only four showed up - one enterprise device was missing! After review, we believe the CES mystery wasn't by coincidence. Jay not showing up and Kopin not having the enterprise pair of glasses on display seem to go hand-in-hand. Google, in our opinion, didn't want the unnecessary media attention on Google Glass EE or additional media anticipation for a new Google Glass 3. The fear of being asked questions or providing updates on anything Glass related was too costly. But we think we have further circumstantial proof the two companies are coming together with Google Glass 3.

In March, a very successful start-up named Upskill, an augmented reality software for enterprise wearables, raised $17 million dollars with the majority of it coming from 2 key industry titans: Cisco Systems (CSCO) and Accenture (ACN) along with Boeing (BA) and GE. Upskill works very closely with Glass. Almost simultaneously, another Software player in augmented reality for Glass, Augmedix who supports the medical community are rumored to be looking to raise more funds this year, on top of the $60 million already raised with Mckesson being a large backer of the original $60 million round. Currently, Augmedix’s is in 40 states with their transcription software and they’re ready to place Glass EE with Doctors across the States and eventually the world. Lastly, Ubimax a parallel AR software provider on Glass raised money with 2 VCs that just exited Mateio, the wearable company that Apple purchased in 2015/2016.

The aforementioned three funding rounds including industry heavyweights tells us Glass has been linearly ramping and is on the cusp of reaching a tipping point for breakout sales of significant Google Glass EE units. The money trail doesn't lie. These VCs see the inside data before investing. Then why is Google so tight lipped on Google Glass EE the past 12 months? The CES no show on the enterprise smart glasses and the no show by Google head Jay Kothari has us speculating Google is getting closer to Google Glass 3.

We are of the opinion Google can dominate the Enterprise AR market if they so choose. They have a number of competitive advantages and, if they successfully ramp Glass EE it could afford them the opportunity to drop the price of Glass by 20-30% to bring scale and at the same time deliver the next generation Google Glass 3 device on the high end of the segment. This segment is ripe for an Enterprise/Consumer device more commonly known as a "prosumer" device.

The integrators have raised the money for scale, now we think its time for Google to do what Titans do: Own the market!

Finally, Dr. Fan on his May 8, 2018, Earnings conference call announced he won a design-in for an Enterprise AR smart glasses from a Silicon Valley type company. He described the company as a very large Tier One Global US company. One US company we all know of working on Enterprise AR in Silicon Valley is most likely be Google. These new smart glasses are due out by year end and we still believe there’s a 12 week lead time for the production orders. We think by the Sept 15 through October 15th window, Google will announce its new smart glasses to the public: Google Glass 3.

This will be the event that both "shatters proofs" Glass and supports Kopin’s run to $10 per share. 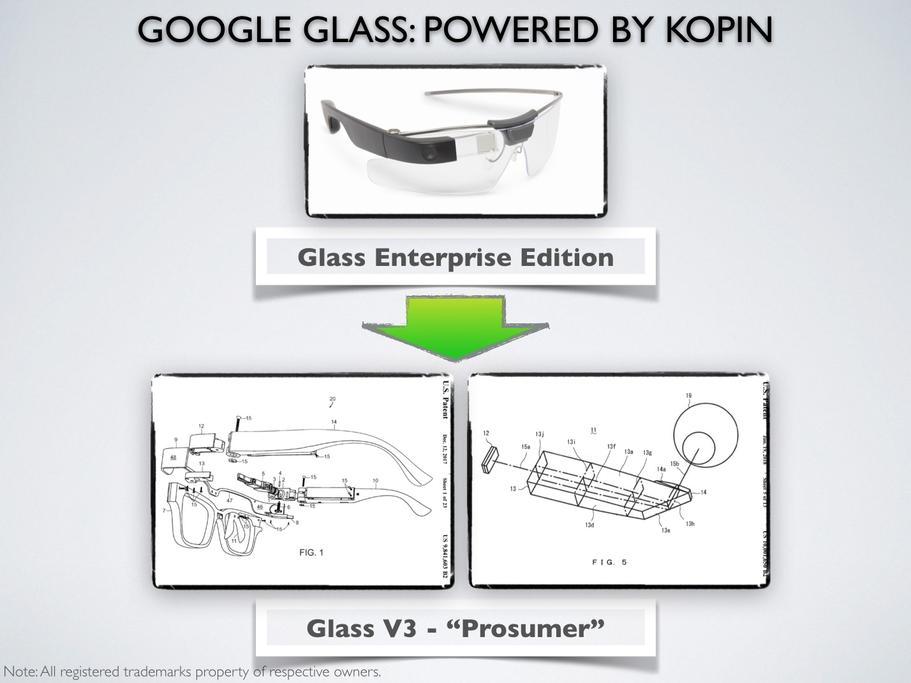