The Holy Grail: Large FOV Optical See-Through AR (Mixed Reality)
Everyone wants to experience the Hollywood version of AR that we will call Mixed Reality: dynamic Optical See-Through transparent overlays that fill a user’s Field Of View (FOV) with information in effect enabling super powers. Think Iron Man. Many companies large and small are pouring resources into efforts to perfect this concept in a device that humans will wear and accept. I think we are 5, maybe 10 years from this version of AR or Mixed Reality users can safely use. To learn more, I recommend reading my interview with Kopin CEO, and Extended Reality (XR) industry veteran Dr. John CC Fan to better understand why: http://www.wearables-era.com/kopin-corporation-visit-march-2018.html

One Tech Titan is ahead of everyone in bringing a Mixed Reality device to market: Microsoft. Their first attempt, the HoloLens Mixed Reality headset launched on March 30, 2016, igniting imaginations of many with the possibilities of AR and Mixed Reality. However, it had drawbacks including its large size, weight, and relatively small Field Of View. It was truly a developer device and not ready for prime time.

As background, Optical See-Through displays with waveguides are provided by a number of suppliers, most notably using Reflective LCOS from Himax inside Microsoft HoloLens V1 and a number of Lumus optical engines. Also, the MEMS projector engine from Texas Instruments that Vuzix is using in their Blade product.


Enter A Waveguide Display Disruptor: Kopin
The following data points suggest to me that Kopin may have secured a major display design win for a waveguide optic based device - I think there is chance that Kopin is inside Microsoft’s Second Generation HoloLens Mixed Reality headset. Here’s why I believe this:

Why A HoloLens Display Socket Win Is So Significant
Microsoft HoloLens V1 sold roughly 50-60K units according to estimates creating a strong user base, developer community and platform for the next generation coming to an Enterprise near you. Note:

This information is by no means a definitive guarantee that Kopin has secured a socket win inside HoloLens V2. To be fair, the new design win could also be Google Glass V3 as Google is already a Kopin customer. However, I believe there is enough information here to trigger investors take a closer look at the possibility Microsoft is going with Kopin for HoloLens V2. Furthermore, it adds strength to my ongoing narrative for investors that Kopin is the undisputed supplier of choice for Augmented Reality and now potentially Mixed Reality head-worn wearables. As such, I think it deserves serious consideration as a core holding for an AR, VR, MR, or wearables investment portfolio.

After all, wouldn’t you want to own the company with the majority of socket wins heading into the explosive AR and Mixed Reality market that is likely to be worth more than $200B within 5 years?

Interestingly, of all of these companies, Kopin has the longest customer list, largest relevant patent portfolio, and most experienced AR, MR, VR management team in the industry. Yet, they are on the low end of the valuation scale. Is that an opportunity? I think so.

I continue to maintain that Hands-Free Monocular Video See-Through AR is the architecture that will see broad adoption over the next 5 years beginning in the Enterprise market and eventually catching fire with Consumers.

Regular readers of my work will know that Kopin’s market share for displays inside shipping Monocular AR devices is dominant. The list of customers using Kopin’s AMLCD displays is long and represents virtually all devices that matter in my opinion.

In 2016 I published a graphic of how I saw the market evolving and, while AR adoption has lagged my initial estimates, I think we will see a solid 5 years of Hands-Free Monocular AR growth culminating in millions of units being shipped annually a couple of years in: 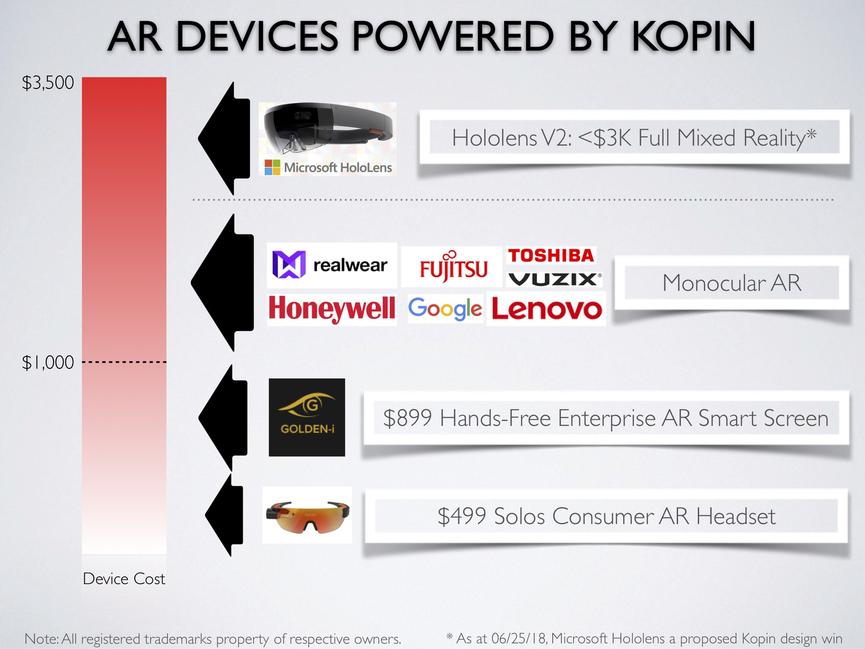 Before I propose a ground-breaking potential Augmented Reality display socket win for Kopin, that I believe could be revealed later this year, a few comments on the company’s current market cap.

There are two primary markets available to get investors to value your asset:

The Private Markets
This is where you'll find the smartest money when it comes to valuing an asset. The investors are Venture Capitalists (VCs) and they're also large companies in their respective field that put aside capital to invest in promising companies in the markets they serve. Think Qualcomm, Intel, Boeing amongst many other large companies that have venture capital arms.

The Public Markets
This is where everyday retail investors can risk their capital with companies micro-managed to ensure transparency for everything they do or don't do and exact timing. In this arena companies are often left undiscovered, get left behind, or are not given the proper attention to detail until the market opportunity hits investors in the face.

To make my point, I've attached sample companies in the Augmented Reality (AR), Mixed Reality (MR) wearable space that are attempting to bring products to market in what could be a $200 to $400 billion dollar opportunity within 10 years: